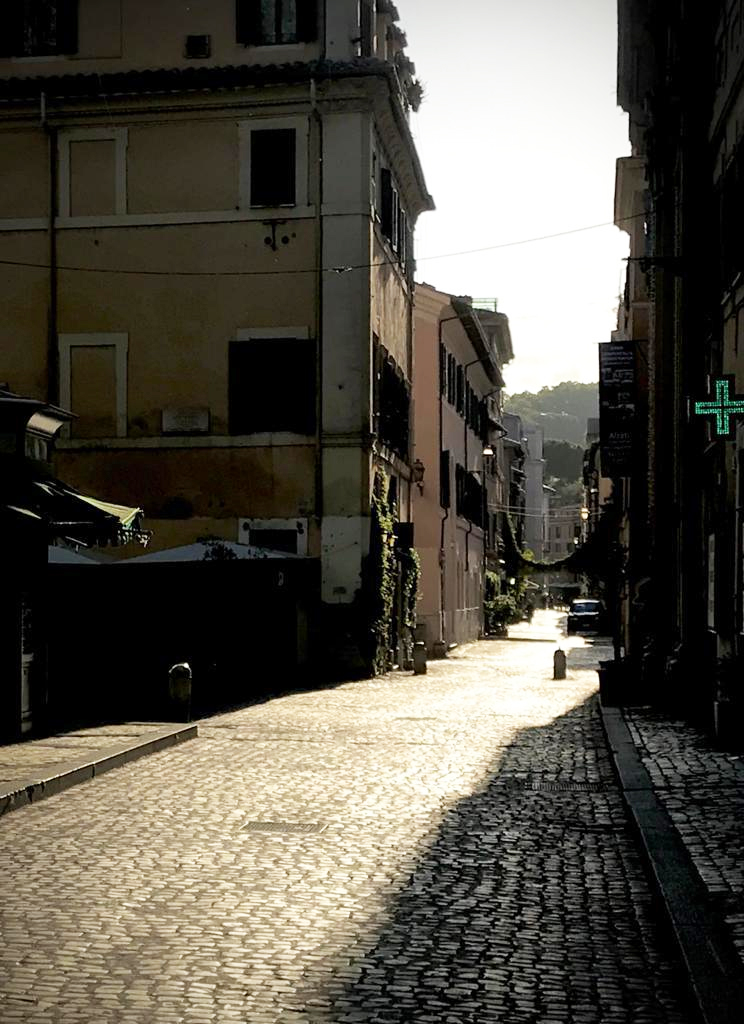 This time we are living in, with the isolation imposed by Covid 19 and the emptying of urban life, the absence of transport, the economic crisis at the door, will, I believe, cause an anthropological change in the way we read and think about the city. The tragic story of the pandemic is also a laboratory where, in a still uncertain context, the historic city which seemed to exist only in memory, re-emerges as a problematic, in some ways,  but still real model.

A model, however, “revolutionised” not because it is distorted in its foundations, but because it seems to have undergone a rotation in the astronomical sense, one would say, where, after a complete revolution, things apparently return as before. Instead, time has passed and nothing remains unchanged.

The lockdown city, contemplated in the silence of empty streets and squares, in an unreal urban landscape, is certainly the concrete representation of a world opposite to the daily metropolis. However, in a certain sense, its difference from the usual city constitutes a critique, indicating its paradoxes and contradictions. One realises how, for example, in the normal city, by dint of talking about it, some problems seemed to have disappeared: the enormous amount of time lost in moving between home and work, or the urgent reality of uncontainable traffic. You can observe things of obvious truth: how the image of the omnipresent cars in the city is not the only possibility, how it is not inevitable  that the senseless and unregulated tourism transforms European cities into dormitories quickly destroying the latest forms of collective life.

Certainly the lockdown has led to a rapid slide into a pathological condition in the perception of the relationship between the domestic space and the city. An extreme condition which as such is, to quote Tafuri, ” is bearer of knowledge”. The house has for some time, in fact, become the very centre of the urban universe, transformed into an autonomous and self-sufficient microcosm, where activities that seemed to have disappeared, re-emerged, such as making bread: the house as the place where everything is integrated and rebalanced again. An autonomous space in which the domestic activities of sleeping, cooking, eating take place, but, at the same time, a production place and a work environment, in some ways similar to the artisanal or shopping house in use for centuries, from the type of the medieval domus solarata, to the row-house in use in the centuries from XIV to XVI.

A kind of return to the origins, before private capital was extensively invested in urban transformations, before building melting gave rise to multi-family houses and rental apartments. It would seem as though there is a resurgence of the pre-industrial fabrics in a new context.

Perhaps the most relevant datum of this “experimental” condition is the space of the house which has once again become “place”, a limited environment identified by specific characters.

The terrible and new images that we have seen, have substantially challenged our notion of limit, which also has to do with the need of the man for through whose limits, in fact, we perceive things. We recognise spaces by means of their borders according to a notion of place diametrically opposite to that of “informal space”, to the lack of limitations, pursued by so much modern and contemporary architecture.

It would seem the return to the conception of the Aristotelian τόπος as a “motionless limit that embraces the body” against the Cartesian, modern and dynamic sense of place as a relationship of one body with others, of connection with the context. Where, moreover, the space would be adapted to a sedentary life, against the image of the metropolitan nomad celebrated in literature for at least a couple of decades.

But be careful, this is not a regression but a much more complex phenomenon. The condition of forced segregation enhances, making it in some respects close and achievable, a central aspect of the metropolitan dream, that of an entirely connected world, of the universal network that makes everything synchronic over time, everything coexisting in space.

The interaction of the house with the outside world thus expands dramatically and follows new paths.

Technically there are no big innovations in the media, but the quantitative problem affects on such a large scale that it presents radically new scenarios.

Since February 2020, the tools that involved specialised networks suddenly became daily devices in millions of houses, while multiplied virtual communities, immaterial aggregations formed through Google meet or Zoom. You don’t go to the office but you can still work with colleagues, sometimes in better conditions; the same lessons are held in Buenos Aires and Tehran at the same time, as exams are to segregated Indian or Chinese students, also in the houses of Mumbai or Nanjing.

Covid 19 seems to have changed perhaps irreversibly the relationship between housing and retail spaces. It is not foreseeable where the uncontrolled acceleration of e-commerce will lead. Certainly, according to an obvious criticism, it empties traditional trade. But will traditional trade still exist?

For decades, the issue of declining materiality in relationships and exchanges between individuals has divided scholars. Maybe it’s time to start distinguishing, to understand that not all virtual is either good or bad. These new forms of communication can “collaborate” with the existing city by integrating physical relations, giving them new meaning and future. It would be possible to rediscover the historic city’s ability to give boundaries, solidarity rules: to aspire to a “concluded” form. That this form is continually questioned by history, that it is unstable and changeable, is part of the same nature of things. But there remains the need and desire to give a limit to the things (to the spaces, to the cities, to the resources employed) to which a new sense of duration is associated, the symptoms of which have been evident for some time. Against the exponential consumption expansion, of a fragile and expensive well-being, historic fabrics could be an example of frugal reuse, of continuous transformation of a matter (houses, fabrics, the same urban organism) that adapts continuously and without waste to new needs while maintaining a deep core, an uncontaminated substratum which is the character and spirit of the city. Which, despite the contrary prophecies that proliferate in these days, will continue to live for many more centuries.

I believe, in fact, that some hypotheses of “ruralization” of our way of living, reappeared as innovative answers to the problem of pandemic risks, are frankly without foundation. The anti-urban thrusts have followed in the history of the western city with results that, today, seem completely out of date. In 2050 the world population will reach almost ten billion, increasing every year by a number of inhabitants equal to thirty times that of a city like Rome. If we only take into account the dizzying increase in the need for food resources that these data entail, how can we think of further consumption of the territory? In Europe the forecasts seem less worrying, but the countryside of many countries is actually a conurbation without form (without limits, in fact) now linking one city to another. It is necessary to think, realistically, of a rational, thrifty densification of our forms of settlement, a new structure of the existing cities and a regeneration of the huge planetary conurbations.

Within this framework appears, among the silent streets of the historic city empty of life, the prefiguration of a brand new urban life, freed from the infinite actual contingencies, which physically wraps itself and revolves around the urban nodes structuring it in to an organism and, together, new digital districts complement the physical ones giving an unprecedented sense to those spaces between things that we have considered empty for too long. Phenomena that have a shape: limited, recognisable, communicable.

The myth of the dissolution of things in the informal, declined and recited for some time like a litany, is thus running out, replaced by a new notion of form intended as a visible aspect of constantly changing structures, through which we not only see, but we have knowledge of the built reality.